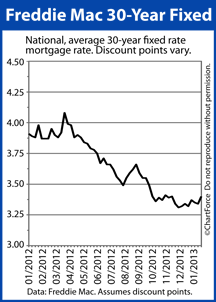 The semi-quarterly statement released Thursday by the European Central Bank (ECB) announced that the region’s inflation remains below its 2 percent ceiling as established by central banker. Economic weakness in the Eurozone is expected to persist into 2013 with signs of recovery becoming evident toward the end of this year.

ECB cited financial and structural reforms as essential to economic recovery, and noted that national governments within the Eurozone have been slow to implement such reforms. Without such reforms, Euro-area economies may continue to struggle, which would likely lead investors to seek a safe haven in the bond market, moving bond prices higher.

Required discount points for the 15-year fixed rate mortgage rose from 0.6 to 0.7 percent.

Import prices for December released Friday were reported at -0.1 percent, below the consensus estimate of +0.1 percent. This report measures the prices of goods purchased in the U.S, but produced abroad and is considered an important indicator of inflationary trends affecting internationally produced goods.

Next week’s economic calendar is full of economic data and includes the release of the Producers Price Index (PPI), Retail Sales figures, the Consumer Price Index (CPI). The Fed is also set to issue its Beige Book report, and the NAHB Housing Market Index and Consumer Sentiment report will be released.